The cross fade mixes between the A (left) and B (right) Buses, and has some auto fade controls under it. The speed of the auto fade is based on the current TX Speed setting.

There is a Dual Output mode which allows for two independent screens which has been useful in some situations but rarely tested nowadays.

There are 2 Buses which can be cross faded on the Screens. The Bus Previews are either side of the Main Screen Preview at the top of the interface.

The the A (left) and B (right) Buses are color coded. The preview has a rotating grid background to help indicate transparent areas and a label to show which mode Bus is in. The A Bus is currently selected in the image above.

Each Bus can toggle between 'Mix' and 'Simple' modes and has 4 layers with 8 slots, giving a Bus a total 32 slots. 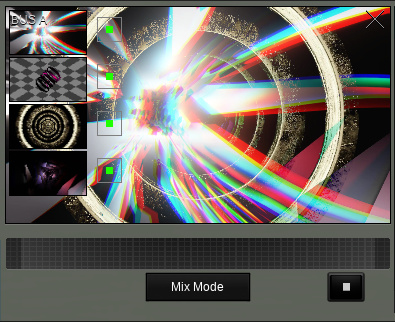 The screen shot of the bus slot above shows

There are 2 basic mixing modes:

Simple mode: This mode only allows a single Slot playback at a time. (although this still includes the slot transition effect)

Mix mode: Splits the Rack into 4 layers which are then Mixed with the default mix mode (the effect as if you layered 4 projectors)

The layers relate to the rack layout.

Each layer has a Wet/Dry control on the rack, with an indicator showing layer level and active state. There are also a Mute and Solo options per layer, which auto-fade the layer levels. The fade speed is taken from the current TXSpeed setting.  In the image above the 3rd layer is in Matte mode and the 4th layer is Muted.

At the side of each rack towards the center of the interface is:

The layers have an Attack/Release control and have a type of Polyphonic chord action. The behaviour for triggering of slots/layers is controlled in the top right of the interface, next to the TXSpeed setting. see 'Bus Racks'

Mixer and layer plugins are color coded blue in the plugins list, here's a screen shot of a Mixer plugin and layer interaction plugin loaded (they have a blue background panel).